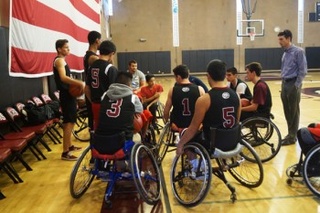 The ECHS students and staff were treated with a surprise assembly, as the White Tiger Boys Basketball program faced the visiting Wolfpack on Jan 25, at the White Tiger gym.

The plot twist: everyone played in wheel chairs. The Wolfpack represented the Challenged Athlete Foundation, an organization that provides grants to student athletes with disabilities. The Wolfpack would earn an exciting overtime victory against the White Tigers, proving that everyone can be athlete no matter their condition.

“The challenge was to show awareness. Regular basketball is the same as sit-down basketball. Everyone is an athlete. It’s just finding that, working on it, and exploring to get bigger.” said Jhoonar Barrera, number 11 of the Wolfpack.

The White Tigers struggled for points the entire game, attempting shot after to shot without the ability to score. On the other hand, the Wolfpack players were able to break away with a lead due to their passing and scoring ability from underneath the basket.

Even with the advantage, the White Tigers struggled for the win. The Wolfpack closed the gap, and by the end of the game, the game was tied and sent to overtime.

During overtime, the game was neck and neck with each team trading bucket after bucket until the scores were tied at the buzzer, resulting in a second overtime.

A third overtime seemed inevitable, but the Wolfpack stole the ball and scored the go-ahead three, sealing the victory for the visiting team. At the end of the game, the score was 21-26, a W for the Wolfpack.

“My team played great. A few players out there really stuck out to me. Jhoonar. I wanted to play well in front of the school, but it was not my best performance,” Sophomore Michael Seo said, who is part of the Challenged Athlete Organization and played on behalf of the Wolfpack.

Even though the White Tigers had less than a half hour to practice in the wheelchairs, Coach Vidosic expected more from his team.

“There was no hustle. We didn’t get back on defense. We made some bad passes, and we didn’t take care of the basketball. We generally played sloppy. It was a disappointing performance,” Coach Vidosic said.