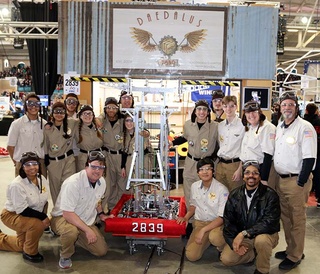 The ECHS Robotics team, Daedalus, ranked #2 out of 66 teams at the end of the seed rounds at the San Diego FIRST Robotics Competition, held in Del Mar on March 10, 2018. This allowed them to be an alliance captain going onto the final rounds. Their unique “triple hang” feature, using two deploy-able arms for other bots to climb, made their robot the only one to accomplish a three-robot hang in the matches leading up to the elimination rounds. While they did not ultimately win the overall competition, their strong showing this year, coupled with their regional victory last year, cemented their reputation as one of the powerhouse robotics teams in San Diego. Way to go Team Daedalus!